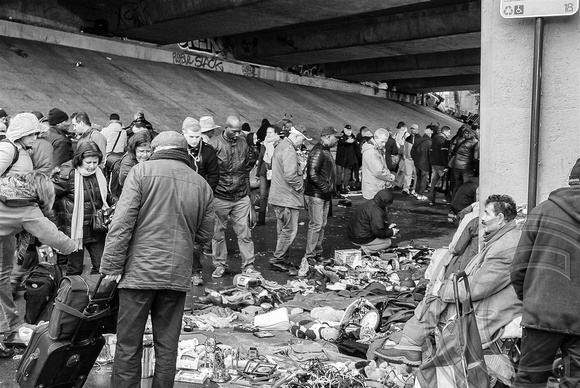 Marche Dauphine located in the 18th arrondissement is known as one of Paris' best known antique market. Antiques several hundred years old are displayed and sold at this most rare of old world markets. Items can sell for as much as 200,000 euros.
Yet, 300 metres down the street under a darkened bridge, just past an adjoining street market selling runners and jeans, is Paris' refugee and gypsy market.
It is known by Parisians Marche des Biffins, or the 'ragpickers' market. Most of the goods are scavenged from rubbish bins around Paris by refugees and gypsies to sell for a few dollars or even a few cents.
All three markets run alongside each other three days a week, but many Parisians complain that the 'ragpickers' market creates dirty streets and crime.
However, one community worker says: "If we treat them like trash then maybe this their response."
© Ted McDonnell
Powered by ZENFOLIO User Agreement
Cancel
Continue