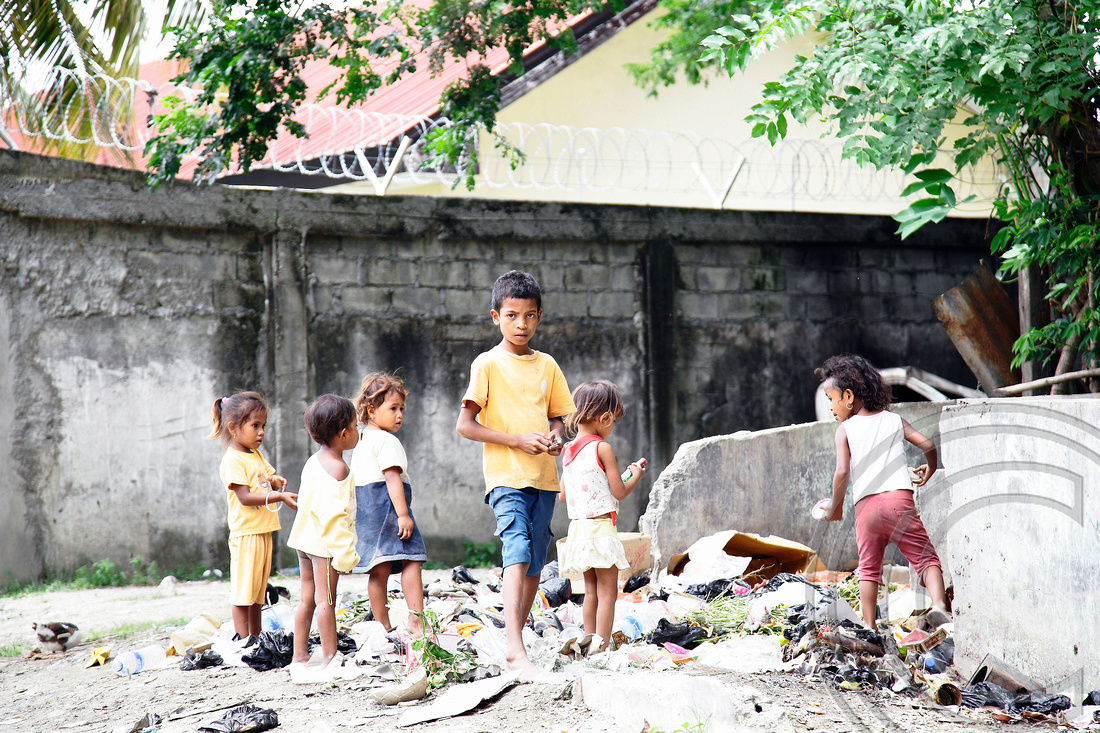 East_Timor_mcdonnell_01DA 'team' of Timorese children search rubbish for anything of value.

Reprinted with permission of The Australian

EAST Timor’s salad days are almost over. The young nation’s oil and gas fields are all but exhausted, and the resources bounty that once seemed so vast is rapidly shrinking. Revered as one of his nation’s independence heroes, Prime Minister Xanana Gusmao is stumbling as his nation closes in on itself. As poverty spreads, the pillars of democracy are shaky in East Timor — the media is muzzled, political foes are jailed and corruption flourishes.

The foothills of Dili are regularly scarred with the corpses of the nation’s young men, over-qualified but unemployed, who hang themselves from trees having given up on a future in the young nation.

They are part of a generation aged under 25 — many tertiary-educated in Dili’s myriad universities — that faces 70 per cent joblessness. If they do find jobs, they work for as little as $5 a day.

Just months out from Gusmao’s retirement, announced earlier this year, some believe the nation’s founding father is running away from his country’s greatest nemesis — the dreaded resources curse.

However, what ultimately may define Gusmao’s legacy as his country’s leader is a financial crisis that economists and non-government organisations warn is draining the fledgling nation’s $US15 billion ($15.8bn) Petroleum Fund, which could be depleted within a decade.

NGOs believe East Timor is fast heading down the path of Nauru, Papua New Guinea and Nigeria, whose governments plundered their fellow countrymen, women and children’s futures through mismanagement.

In the latest Global Hunger Index, East Timor ranked alongside Burundi, Eritrea, Sudan and Chad. Poverty alongside high unemployment, malnutrition and a deplorable healthcare system are seen as continual threats to East Timor’s stability and security.

The World Bank recently sounded the alarm with an independent review on the progress of the Timor-Leste Country Assistance program reporting frustration in many areas.

“The bank’s contribution to building civil service capacity and fighting corruption was limited and achievements modest, while the bank’s efforts at engagement in the national strategic planning process had little impact on the government’s strategies,” the review says.

So grave are the country’s fin­ances, reports East Timor’s economic watchdog La’o Hamutuk, that the nation could be broke within a decade.

The head of La’o Hamutuk, Charles Scheiner, says oil and gas revenues provide 95 per cent of East Timor’s state revenues and four-fifths of gross domestic product. East Timor’s budget this year is $US1.5bn for its 1.2 million population. Scheiner says many believe the petroleum fund will pay for state activities after the oil and gas fields are exhausted, which could be as early as 2020 if the Greater Sunrise project remains stalled.

With little other revenue available, the fund could be depleted within five years after that.

Scheiner says as one of the most petroleum export dependent countries, East Timor faces daunting choices. He believes it remains to be seen if its leaders will make the difficult decisions that will rescue their people from a “resource curse’’.

“Although political structures and pressures encourage short-term spending of the country’s limited non-renewable resource wealth, wise, longer-term policies would use these transient oil and gas revenues to invest in Timor-Leste’s people, rather than in large physical infrastructure projects with doubtful economic return,” he says.

Scheiner says investments in education and health, combined with improvements in rural roads, water and sanitation, would provide a foundation for a sustainable, equitable non-oil economy.

“Unfortunately, the current path — where most of the country’s non-renewable wealth goes abroad, with financial benefits accruing to a small elite while the impoverished rural majority grows even larger — repeats the common, disastrous pattern,” he warns. “How will East Timor sustain its current 50-to-1 trade deficit in a decade, when there is no oil money left to pay for imports?”

Enter Agio Pereira, East Timor’s Minister of State, a man who is not afraid of speaking his mind. Pereira, 58, tipped as a likely contender to replace Gusmao when he steps down, acknow­ledges the challenges ahead for his country.

“You can’t develop a country in just 12 years. Look at the massive destruction that occurred over the 24 years of Indonesian rule. How can we fix everything in such a short period of time?” he says.

The Australian-educated Pereira says the East Timorese struggle for their freedom has not ended. “Every day is a struggle. But you know, reality is man-made and we can change our reality and make East Timor strong for the future of all our people.

“Yes, poverty in our country is frightening, but we have a strong sense of family and solidarity. Families work together to overcome poverty.”

With the average monthly salary just $US80, Pereira says extended families use their meagre resources as a collective.

But he concludes: “People are too pessimistic.”

The man who led East Timor to peace, Nobel prize-winner and former president Jose Ramos-Horta, shares Pereira’s optimism and is hopeful his country will find the path to prosperity if treated fairly by its nearest neighbours.

Ramos-Horta says predictions of failure ignore many of the achievements during the past 12 years.

“I am in the positive camp and by habit look at the broader picture from a 10-year perspective; where we were in 1999-2000, and where we are today,” he says.

“I acknowledge the challenges, structural problems, policy wrongs, and I also look at the tremendous progress we have made under the governments of Mari Alkatiri and Xanana.”

However, East Timor’s best-known journalist, Jose Belo, says he finds government extrava­gances and corruption galling when most Timorese live on less than a few dollars a day.

And the corruption buster believes new media laws have been created to obstruct the reporting of the country’s deteriorating economy and the alleged corruption that has plagued East Timor during Gusmao’s two-term rule.

“The elites that govern East Timor are concerned that free speech will limit their ability to successfully control and abuse the petroleum fund for their personal benefit,” he declares.

“Despite anti-corruption programs being in place they have had little effect. While some offenders have been made an example of, this is mostly window-dressing. The vast majority remain unhindered in the pursuit of lining their pockets.”

Belo reports that several politicians are under investigation by the Anti-Corruption Commission, including Finance Minister Emilia Pires, who allegedly was involved in a decision to award a contract worth $US2.04m to her husband’s Melbourne-based business, Macs Metalcraft, for the supply of hospital equipment.

Pires’s name is on the investigation list of the Prosecutor General over the contract, but she repeatedly has denied being involved in awarding the contract.

“Minister Emilia’s husband does not need a contract or project from the government. It was because these things needed to be acquired that we said, go and buy them from there,” Gusmao has said.

The Australian has attempted on numerous occasions to contact Pires for a response to the allegation. Each time she has offered no comment.

Pires’s husband, Warren Mac­Leod, denies his wife had a role in awarding his company the hospital supplies contract.

“The people in Dili know this will come to nothing. Countless other members of government as well as members of parliament, past and present, are under similar scrutiny. This scrutiny is due to media activity, and it’s for this reason that media and citizens are about to be muzzled.”

Gusmao also has constantly attacked the Anti-Corruption Commission in the East Timor media when defending his ministers against corruption allegations, stating the commission investigates “trifling matters”.

The only significant corruption scalp was the 2012 conviction of former justice minister Lucia Lobato. She is serving five years in prison.

Human-rights scrutiny has been placed on the Gusmao government following the recent arrests of outspoken former presidential candidate Angela Freitas and one of East Timor’s most revered former Red Brigade commanders and head of the Maubere Revolutionary Council, Paulino Gama, better known as Mauk Moruk.

Freitas has since been released but is under virtual house arrest awaiting trial.

Freitas tells The Australian she was arrested at Dili airport after returning from Indonesia following a medical operation. East Timor police held her for 72 hours.

“They accused me of abuse of power and gun running. They claim I wore a military uniform but at the time of the accusation I was in hospital in Indonesia,” she says.

The future of Moruk, a critic of Gusmao since the 1980s, is uncertain. Moruk was detained for “wearing a military uniform in public’’. He remains in Becora Prison without charge.

East Timor’s Prosecutor General has requested 12 months to prepare the state’s case against Moruk and his followers. Human-rights lawyers are concerned Moruk will not get a fair trial because of the government’s influence over the judiciary.

As the Prime Minister’s retirement draws closer, Belo and others remain sceptical about his official retirement motives. At the time of announcing his retirement late last year, Gusmao said it was “time to hand over the country to its younger leaders’’. At the same time he said he would set up a council of elders.

Belo says: “It could be another Xanana game.”

The council of elders will include past leaders including Gusmao, Ramos-Horta, former PM Alkatiri and Fretilin legend Francisco “Lu Olo” Guterres.

However, younger politicians from within the government and opposition Fretilin believe Gusmao is keen to hand over the reins now because he wants a “fall guy” for East Timor’s mounting financial crisis and someone else to be blamed for the depletion of the Petroleum Fund.

“Once the disaster strikes, brother Xanana will try and come back a hero to save the country again,” one veteran Fretilin politician says.

Would-be PM Pereira rub­bishes the conspiracy theories and believes Gusmao’s legacy is safe: “He is the transformer of this country and a political weapon.”